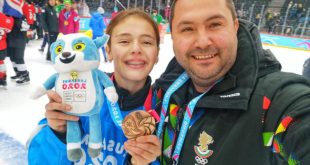 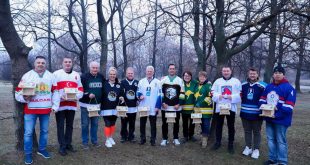 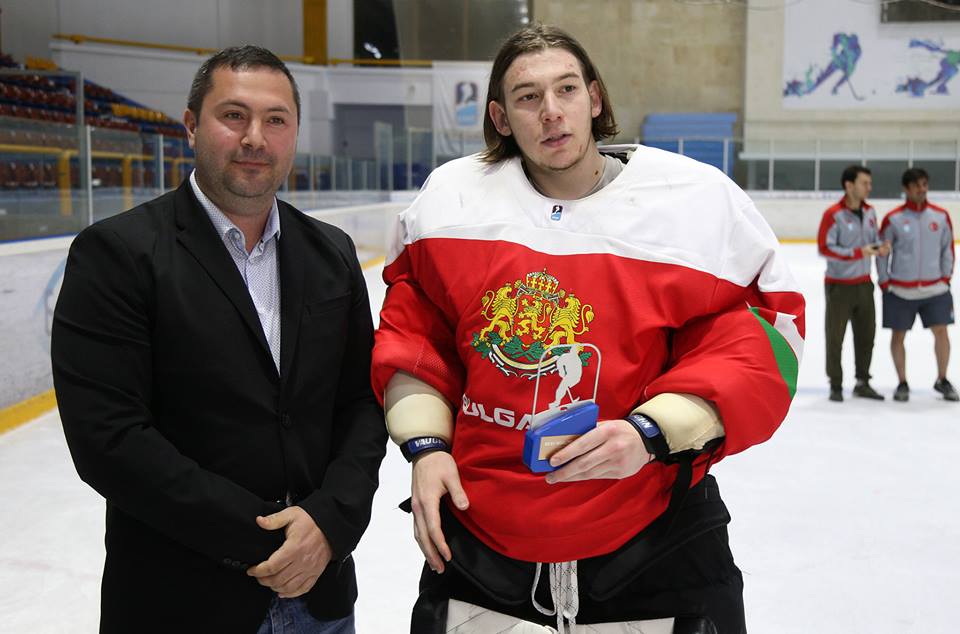 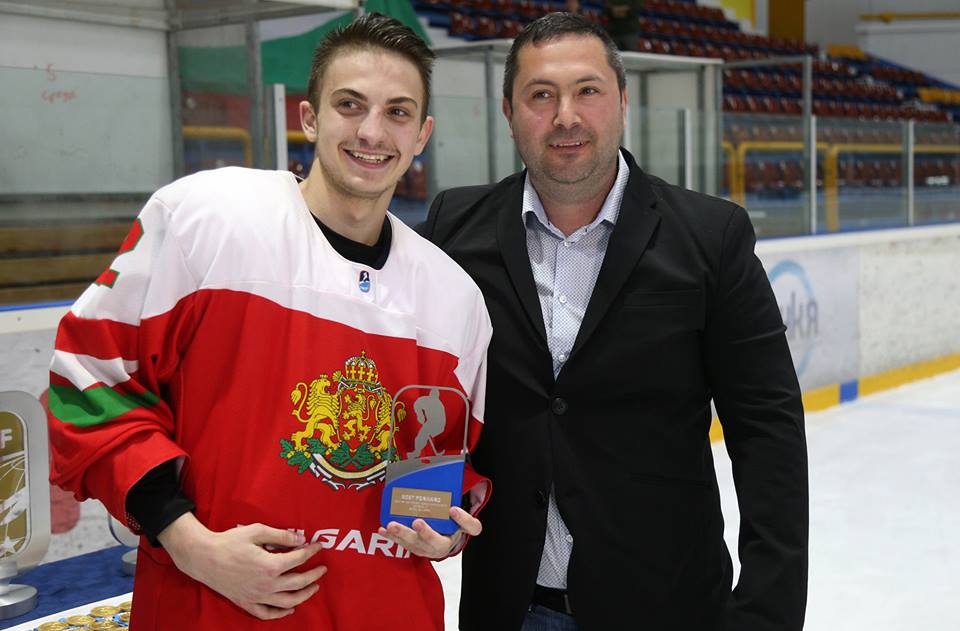 In a period of one month, Bulgarian ice hockey struck gold twice on the world stage. Four weeks ago the U18 team won a promotion to the Division II Group B. This time around it was the men’s team that secured the first place in 2019 IIHF Ice Hockey World Championships Division III on home ice in Sofia. 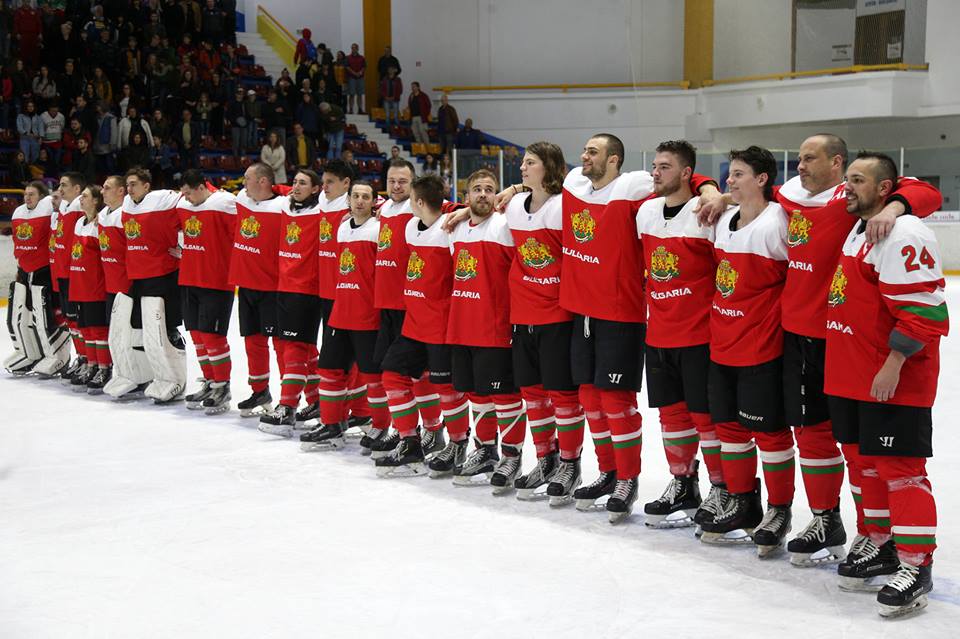 In the round-robin tournament Bulgaria went undefeated in the first four games and secured the top position and promotion to the higher division one day before end of play. The host country started with a 12-2 rout against South Africa, continued with a narrow 3-1 win over Turkey and followed with more victories: 6-2 against Turkmenistan and 11-2 against Chinese Taipei. The Bulgarian men’s team has won an IIHF tournament only twice in the history – in 1998 (then Group D) and in 2014 (Division III).

“It was not as easy as the results suggest. I came here for one purpose only – to earn a place in the upper level. Last year we couldn’t do that, so now I am very happy that we did it”, said head coach Robert Kalaber. The 49-year-old Slovak is in this position for a second season. Last year he led the Bulgarian team to second place in the tournament in South Africa with the only loss coming against Georgia. 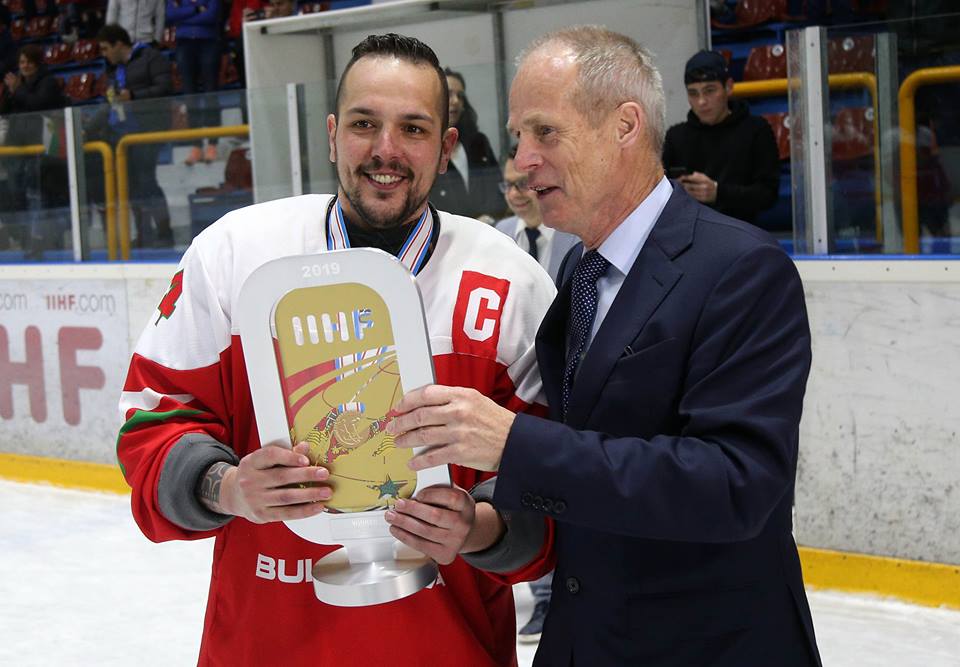 “Compared to last year the most improved part is the discipline of the team. There are some young boys on the roster who play abroad like Miroslav Vasilev. Now they are one year older and continue to progress. I can see improvement in most of these players, including the goaltender Dimitar Dimitrov. What is important is that we have convinced all players to subordinate everything in the name of the team. It does not matter who is the best, who is the youngest or the oldest, they all played for the team and the results were seen,” continued Kalaber.

The onslaught against South Africa began from the puck drop. The first goal was scored in the 34th second by 34-year-old Stanislav Muhachev. It was quite symbolic as he was on the coaching staff of the gold winning U18 national team. Another veteran, 40-years old Alexei Yotov, made it 2-0 less than a minute later. Miroslav Vasilev had a natural hat trick within just 3:03 minutes, but if that wasn’t enough, Yotov and Vasilev scored again to give the hosts a 7-1 advantage before the first intermission! Vasilev finished the game with 6 points (5+1), Yotov and Ivan Hodulov had four a piece (2+2), Muhachev tallied two goals and Angel Dzhorov had one. 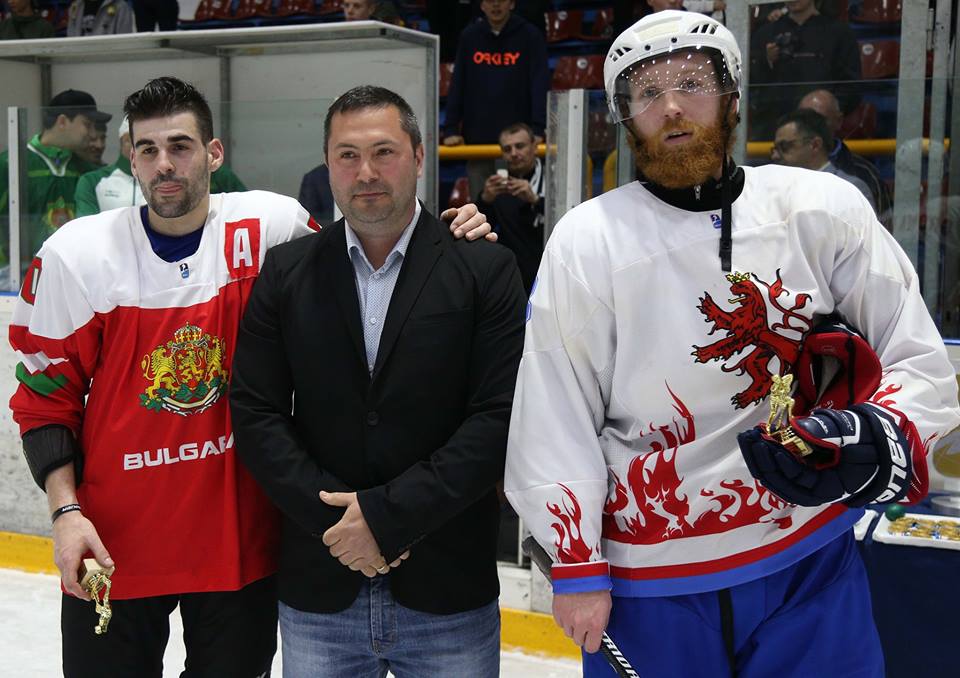 The next day Bulgaria played against Turkey and after a scoreless first period Miroslav Vasilev tried a pass during a counter attack, but the puck was redirected by the skate of a Turkish defenceman and went into the net. Three minutes later during a 4-on-4 situation Veselin Dikov lost the faceoff, but went ahead to take away the puck and scored on a rebound of his initial shot. In the end of the second period Yanaki Gatchev made it 3-0, finishing a combination with Yotov and Martin Boyadjiev. The only goal in the third period was scored by the Canadian-born Turkish forward Cengiz Ciplak.

Alexei Yotov, who is the Bulgarian all-time point leader in World Championships, could not play in the next two games for personal reasons, but that didn’t stop the team rolling. “I saw Alexei for the first time on the eve of the tournament, because he could not come to South Africa last year. He helped us a lot and had a huge contribution for the team to get in the right direction with first two games. The boys realized that if they did everything we said, the achievement of our goal is completely real,” said coach Kalaber.

In a game full of penalties (with a total of 90 penalty minutes) Bulgaria won against Turkmenistan on Thursday. Martin Nikolov shot the puck from the boards near the blue line and surprised the goalie Keremli Charyyev in the 7th minute. 16-year-old defenceman Konstantin Dikov scored during a two-man advantage later in the period. Pavel Barkovskiy tallied two goals for Turkmenistan in the second period to cut the deficit to 1-2 (on a power play) and 2-3, but both times the host reacted with power play goals on their own by Muhachev and Konstantin Dikov. In the third Hodulov and Boyadjiev also scored with a man advantage for a 6-2 victory.

On the next day Bulgaria had to win against Chinese Taipei in any way to secure the first place. Tzu-Chieh Lin opened the scoring with a rebound in the 13th minute, but Bulgaria tied five minutes later after a combination between Vasilev and Muhachev. Just 11 seconds after serving his penalty for hooking Miroslav Vasilev blasted the puck from zero angle towards the opponent’s goaltender and made it 2-1. This was just a start for the 6-goals period and another double digit win score for the “Lions”. Ivan Hodulov, who plays for Gothenborg HC in Sweden, was chosen for the best player in the game after finishing with 5 points (3+2).

“I don’t know how the coaches are working with the juniors in Bulgaria, but for the men’s national team to have more success and to be able to stay in the Division II Group B or even to go to Group A, there has to be more ice practices during the season. There is no way for the local players to progress if they meet for practices just two times a week in their clubs during the season. I know that they are working regular jobs, but for this team to continue its way up in the ranks, there have to be more organized practices and better professional work,” replied Robert Kalaber on a question about the potential of this team to stay in the Division II Group B.

Kalber played with Juraj Dusicka in MHK Prievidza in 1998-2000 and 2002-05. Dusicka is based in Bulgaria since 2010 and is already a nine-time national champion with three different teams. He was the one who asked Kalaber whether he is interested in the head-coaching position of the Bulgarian men’s team. Kalaber’s coaching career started with Dukla Senica (2006-08) and continued with Dukla Trencin (2011-14). Since 2014 he is the head coach of the JHK GKS Jastrzebie and won the silver medal in the Polish championships in 2015. “I have a three-week vacation that I use to work with the Bulgarian national team. I want to thank the management of the Jastrzebie for allowing me to do that for a second year in a row,” explained Kalaber, who has two more years on his contract with the Polish club.

Before the last day of play Bulgaria has the maximum of 12 points. Turkmenistan (7), Luxembourg (6), Turkey (6) and Chinese Taipei (5) are in contention for the bronze and silver medals. South Africa will be relegated to the 2020 IIHF Ice Hockey World Championships Division III Qualification after losing all of its first four games (0 points). The schedule on Sunday in the Winter Palace is: Turkey – Turkmenistan, Chinese Taipei – RSA, Luxembourg – Bulgaria. All games are shown in the live stream in the game centre. 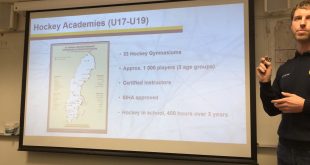